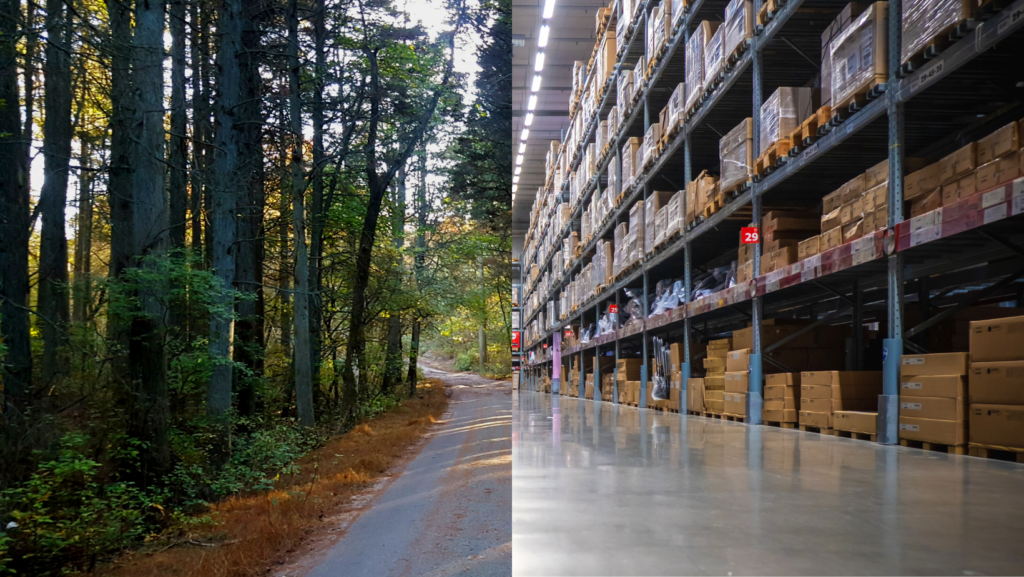 Image of warehouse aisle in an IKEA store CC to Vecteezy

On Tuesday, November 29, the Planning Board of Monroe Township (Gloucester County) convened in a municipal meeting hall packed with angry residents. For over three hours, the township officials and project engineers fielded questions and complaints from residents. The board quickly abandoned their attempts to keep individual testimonies under 3 minutes of length as the crowd shouted them down. Residents demanded an explanation of how a proposed warehouse and townhouse development would benefit the town, as it already suffers from traffic and congestion. A three-time cancer survivor who had moved to Monroe from NYC to escape the noise and pollution lamented that these threats were now coming to her backyard. A young couple who had hopes of building their family in this quiet community were heartbroken to see this dream dashed; their property is now the single closest property to the proposed warehouse. For their troubles, the developer offered a meager wall of 6-foot-tall trees to block their view of the warehouse, which could be as tall as 45 feet.

This is yet another case of a forest and wetlands being destroyed in the name of “redevelopment”. This is being applied throughout New Jersey, and the Pinelands are not exempt. Despite the additional environmental protections afforded to the various Pinelands regions, the Comprehensive Management Plan actually makes no explicit mention of warehouses.  Commissioners have expressed interest in considering amendments that would incorporate some best practices for warehouse siting and associated infrastructure. PPA will be advocating for the Commission to make progress on this issue, and is co-sponsoring a webinar with the League of Conservation Voters on January 23 at 6 PM. A state law (NJ Rev Stat § 40A:12A-14) gives wide jurisdiction to town planning boards to label areas as being in need of “rehabilitation”. But how meaningful is this designation when it can be given to entire municipalities, including all of its undeveloped land? This law was meant to encourage the transformation of blighted areas. In practice, the law is being widely leveraged to justify large construction projects on land that has never seen a bulldozer. Efforts are underway to address this deficiency/oversight in the law; PPA is working with a consortium of environmental organizations to propose amendments that would exclude undeveloped land from being counted as “redevelopment”. You can contact your district assemblyperson/senator to let them know that they should make this a priority. However, these changes will be too late to save the nearly 10,000 square feet of wetlands that will be filled in (if NJDEP approves the freshwater wetlands permit), and 42 acres of forest that will be destroyed or fragmented for “redevelopment” in Monroe township.

If the guiding mantra of real estate is “location, location, location”, then the overarching theme of community advocacy may be “timing, timing, timing”. The township ordinance that paved the way for this development to be approved was discussed and approved at meetings held in early 2022 when the country was still in the grips of its second holiday season wave of pandemic infections and fatalities. Without this ordinance, the developer would have had to request a “variance”, which is an exemption from the rules that the town has set for all development to follow. Each of these variance requests would have presented an opportunity for residents to make meaningful objections to the project. Since the town had effectively changed its rules to satisfy the wishes of this developer 8 months earlier, no such variances were required for approval at the November meeting. The development would be considered approved “by right” if the developer followed the rules that it had written for the town. A former planning board member reminded the board that they could still deny the project on the grounds of health and safety concerns for the residents; the testimony from residents heard that night on the topics of increased pollution, flood hazards, traffic accidents, and noise/light nuisances would have provided ample justification for doing so. Fearing a lawsuit from the developer, the Town Solicitor and Chair of the Board instructed the other board members to ignore these pleas and approve the project anyways. In a 5-3 vote, the board approved the warehouse.

Laws have been passed in an effort to ensure that the public is informed of the activity of its government; this is mandated through public announcements of meetings, ordinances, and applications in local newspapers, and sometimes through direct notices delivered via certified mail. However, it is very easy to satisfy the letter of the law, without upholding the spirit of the law through genuine community engagement. Officials had technically satisfied the requirement to notify residents about this meeting by publishing a list of meeting dates the year beforehand. If a resident took the time to check the agenda for every single meeting, then they would have seen the innocuous agenda item described as: “An Ordinance to Adopt the Mink Lane Redevelopment Plan of Monroe Township”. When a resident asked how the town had notified its citizens of the ordinance, they were simply provided with a receipt for $64.64 to publish the following notice in the local newspaper:

What is the average person supposed to make of this obtuse language? It would not become clear how monumental this ordinance would be until it was used as the basis to push through the development approval at the November 29 meeting. New Jersey law mandates that residents within 200’ of the properties in question must be notified via certified mail about the application that was being considered at the November meeting. Was there anything that the residents could have said at the November meeting to change the outcome? Apparently not; they were 8 months too late. Since no residents spoke up at the February meeting when the redevelopment ordinance was passed, the application was considered a “done deal” when it entered the next step of the approval process.

How can debacles like this be avoided in the future? The disintegration of local news has left residents uninformed about what is happening in their own backyards. Without this, it is up to residents who are well-connected to their communities to attend township meetings and to bear witness to its activities. Many of the cases that we devote our research and advocacy efforts towards are first brought to the attention of PPA by concerned citizens. Last year, PPA helped the residents of Egg Harbor City to successfully block the designation of a forested park as an area in need of “redevelopment”. We encounter dozens of similar cases every year, but an important factor determining the success of these resistance efforts is the timing. There is a big difference between resisting a proposal in its first planning stages versus trying to intervene right before the final contracts are signed. Pinelands Preservation Alliance is working to empower residents to become engaged in their communities and municipal governments; we aim to do this by establishing a community of residents called the “Pinelands Community Network” (PCN) who are committed to keeping their municipal governments accountable to the wellbeing of the people and environment of their towns. By encouraging consistent municipal engagement, we aim to help residents identify problematic projects in a more timely manner. To learn more about this effort and get involved, check out the upcoming series of community meetings that the PCN will be holding throughout South Jersey. The threats facing Pinelands and Pinelands-adjacent habitat are great, but we are confident that engaged citizens can stem the tide of unrestrained development.

One response to “Communities Organizing Against Redevelopment”