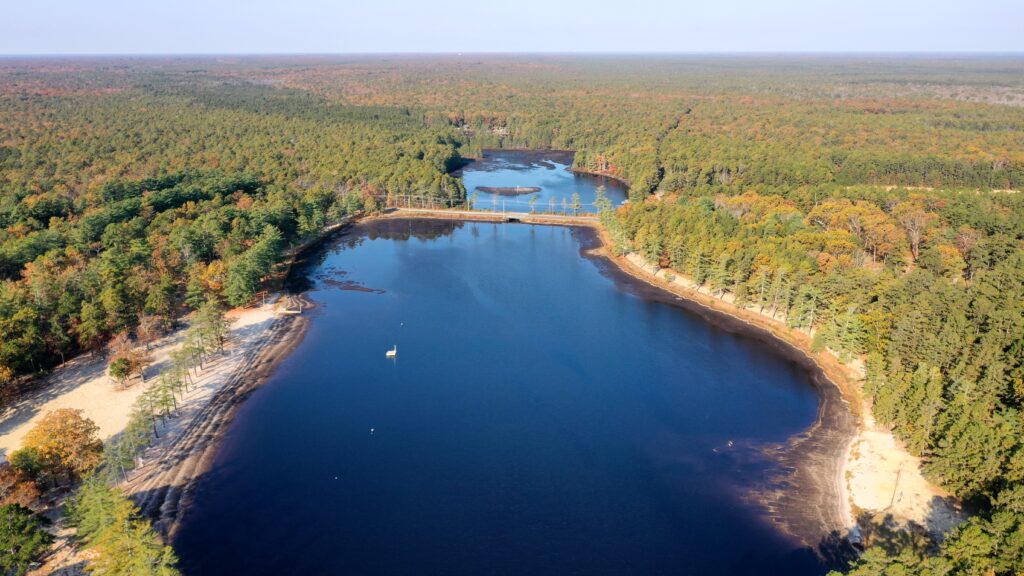 Editor’s Update: Thanks to the incredible Egg Harbor City residents and neighbors, the 2400+ people who signed the petition and the more than 100 people who packed the Common Council meeting on the 15th, the City Council voted “NO” to designate the Park an area in need of redevelopment! The deed restriction will stay in place, and the Park will remain public!

On December 15, 2021, the Egg Harbor City Common Council will consider whether to approve the city Land Use Board’s recommendation to designate the historic and widely cherished Egg Harbor City Lake Park as an “area in need of redevelopment”- i.e., a blighted area.

The park is on land given to the city 150 years ago via the Colwell Deed, which required that the park was “forever to remain public.”  There is a picturesque lake, a campground, and Pine Barrens woodlands and wetlands on the 400-acre parcel.  Protected species inhabit the site.  It is a very popular place for recreation and relaxation, as clearly evidenced by the overwhelming public interest in the city’s moves toward redeveloping the area.

To give a sense of what conditions the city needs to find at the site in order to legally declare it blighted under the Local Redevelopment and Housing Law, here are just some of those conditions, at least one of which would need to be found existing:

“A growing lack or total lack of proper utilization of areas caused by the condition of the title, diverse ownership of the real properties therein or other similar conditions which impede land assemblage or discourage the undertaking of improvements, resulting in a stagnant and unproductive condition of land potentially useful and valuable for contributing to and serving the public health, safety and welfare, which condition is presumed to be having a negative social or economic impact or otherwise being detrimental to the safety, health, morals, or welfare of the surrounding area or the community in general.”

If it seems absurd to describe the City Park in such a way, consider that is exactly what the Land Use Board did when it adopted the Determination of Need Report on November 16, 2021.  Incredibly, the Report cited the lack of sewer service and the existence of wetlands as conditions satisfying the criteria above.  The truth is that the low-intensity nature of the City Park is precisely what was intended under the Colwell Deed, and the city may have a very difficult time abolishing this restriction if it decides to move forward.  Eminent domain must be exercised for a valid public purpose, and it is entirely unclear how that principle would be satisfied by repurposing publicly used land for possible commercial purposes through redevelopment.  Further, to cite the existence of wetlands as a condition indicating a “stagnant and unproductive condition of land” that negatively impacts the community is inexplicable.  New Jersey courts reviewing designation determinations have even pointed out that natural features like wetlands are a benefit, not a detriment to surrounding communities, and have required municipalities to consider those benefits when contemplating a redevelopment designation.

Other conditions ostensibly supporting a designation in the Report focused on vacancy at the site.  But again, the City Park is not vacant- it is used by many people every year for multiple recreational purposes, as envisioned by the original grantor of this land. We should note that the Land Use Board vote was very close, and several Board members, presumably unconvinced that the Park met the criteria, voted against the designation. But the majority opinion carried, so a recommendation for designation is now before the Common Council. You can read our full comments to Egg Harbor City Council here.

We encourage all members of the public who wish to continue enjoying the park to attend the December 15 meeting and talk about the value of the location, the many positive uses and activities taking place there, and the benefits it provides for the town, the public, and the surrounding region.  Please also sign and share the petition.

Tell the city not to take any steps that could allow an intensive commercial operation at the site, and instead pursue improvements that are compatible with the established, legally protected public use of the park.