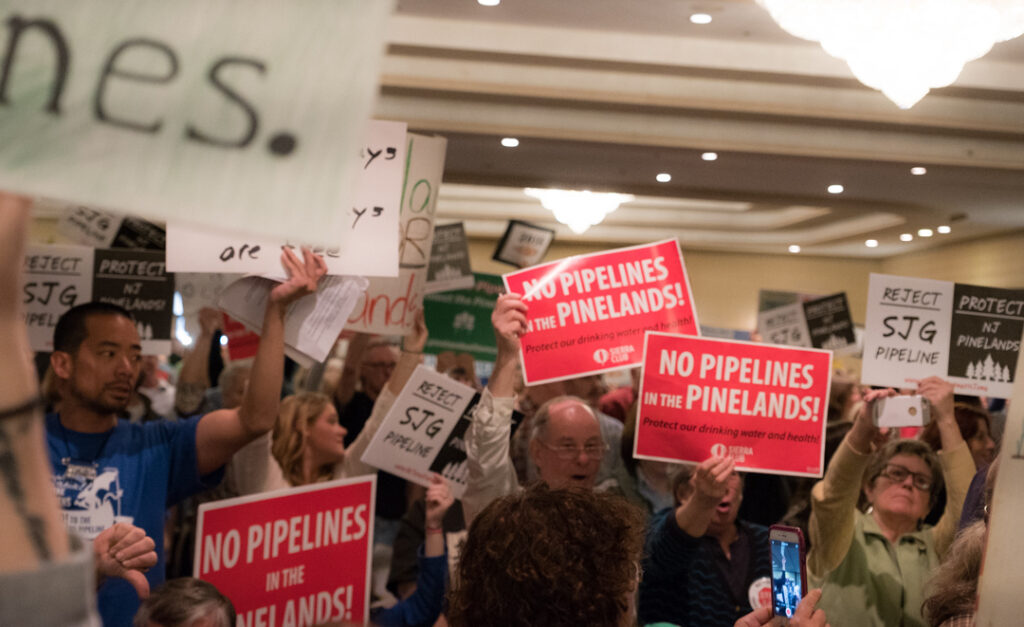 Crowd during the February 2017 Pinelands Commission vote on the South Jersey Gas Pipeline.

Thank you Rick and D'Arcy

The Pinelands protection movement has succeeded so far, despite occasional setbacks, because of the dedication, courage and independence of people like Rick Prickett and D’Arcy Green.  Their metal was tested during the struggles over the South Jersey Gas and New Jersey Natural Gas pipeline projects.  Both were stalwarts in defending the integrity of the Pinelands Comprehensive Management Plan in the face of the Commission’s executive director, Governor Christie and Senate President Sweeney, and interested labor unions, all of whom aggressively pushed to get those projects approved by manipulating the rules and exploiting the New Jersey court system’s unwillingness to vindicate Pinelands laws against the political powers that be.  Without Rick’s and D’Arcy’s defense of the Pinelands, we would not have won the battle against the South Jersey Gas pipeline.

In December, Governor Murphy nominated new individuals to replace Rick and D’Arcy on the Commission, and the Senate confirmed those nominations in early January.  We advocated for the governor to instead assign the new nominees to other slots.  But the decision had been made, and we were not able to get it reversed.  Now we look to all the new members of the Commission to show the same courage in the controversial cases that are sure to arise again as Rick and D’Arcy showed in their defense of the Pinelands.

Rick Prickett is a life-long naturalist who retired in 2006 after 26 years teaching high school biology in the Lakewood School District. Rick was named Teacher of the Year in 2004, and recognized by the Pinelands Preservation Alliance as an outstanding Pinelands educator in 2005.  He served two terms on the Pemberton Township Council, and was the President of the Whitesbog Preservation Trust, where he has served as a Trustee since 2003.  Rick served as chair of the Pinelands Commission for almost two years.  He is eminently thoughtful and truly cares about the Pinelands.  His leadership and dedication will truly be missed on the Pinelands Commission

D’Arcy Rohan Green currently serves as President of the Bay Head Borough Council, and is a former member of the Borough’s Environmental Commission and Planning Board. D’Arcy started her career as a dune consultant and also worked as a newspaper reporter/columnist.  D’Arcy served on the Board of Directors for Save Barnegat Bay and as an advisory member of Clean Ocean Action and the New Jersey Environmental Federation. D’Arcy was appointed to the Pinelands Commission in 2011 and served through two different administrations.  She was a critical voice during the South Jersey Gas debate, and her commitment to environmental protection was readily apparent.

PPA thanks Rick and D’Arcy for their environmental spirit, for being a Pinelands defender, and for carrying the heavy burden for so many years.  We will miss seeing them on the Pinelands Commission, but hopefully they will continue to fight with us to protect the Pinelands.

2 responses to “Thank you Rick and D’Arcy”