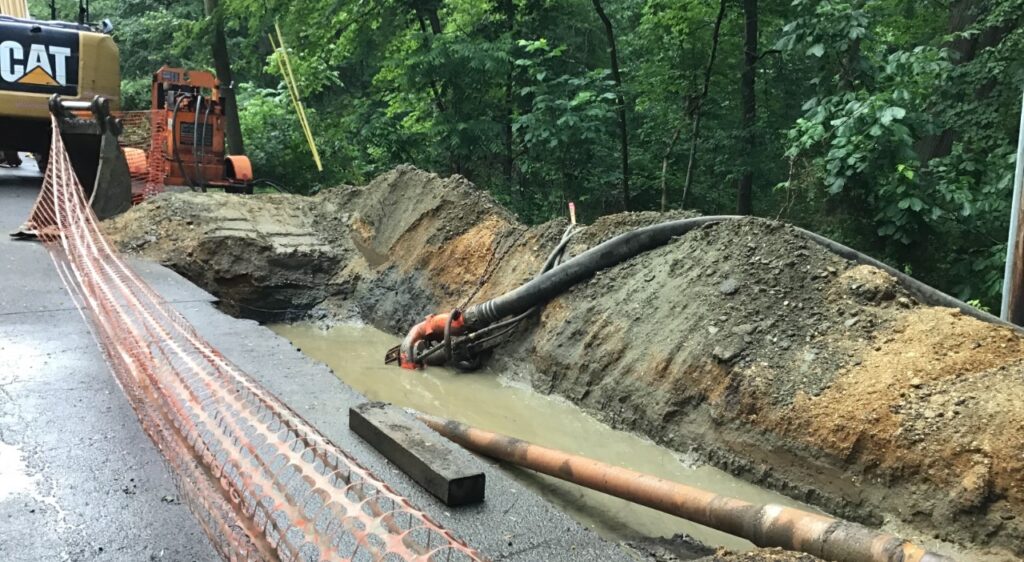 NJDEP issued a letter on July 8th suspending permits for the construction of the Southern Reliability Link pipeline.

After a series of recent accidents impacting both residents and the environment, the New Jersey Department of Environmental Protection (NJDEP) has suspended permits for the New Jersey Natural Gas (NJNG) Southern Reliability Link pipeline in a letter dated July 8, 2020.  Underground drilling for the pipeline must now stop.  This is a significant victory for the environment and residents and comes after years of opposition to stop a project that opponents have demonstrated is unnecessary and dangerous.

On June 19 underground pipeline drilling caused a release of drilling fluid into a stream and a nearby resident’s home. The slab of the affected home cracked due to hydrostatic pressure, mud flooded the home, and the building inspector condemned the building, advising the resident to leave immediately.  The drilling sludge also discharged into a local stream, necessitating a cleanup during which NJNG caused further environmental destruction.

Residents near the construction contacted NJDEP right away- possibly before NJNG did- and the agency began an investigation.  They also informed Pinelands Preservation Alliance and the Sierra Club of New Jersey, who initiated action and demanded that NJDEP and other relevant government agencies stop the pipeline.  Over the last two weeks, hundreds of residents flooded DEP, the Board of Public Utilities, the Pinelands Commission, and the Governor’s office with calls to stop drilling, overloading their phone systems.  Protestors demonstrated at the drilling site and demanded that drilling stop.

NJDEP did the right thing and suspended drilling construction pending investigation of the past impacts of this project, as well as what further risk lies ahead should construction continue.  According to the suspension letter, “…activities within freshwater wetlands, transition areas, regulated waters and riparian zone shall cease immediately…’ until NJDEP has the opportunity to evaluate “… the potential for additional impacts to public health, safety, welfare and/or the environment.’  However, regular trenching and laying of pipe continues, and residents are calling for a complete halt to the project.

“It’s been six years and multiple heartbreaks, but we’ve finally gotten the attention of the NJDEP,” said Agnes Marsala, President People Over Pipelines.  “I am heartened that the tide seems to be changing and the toxic culture created during the Christie era is starting to lift from the NJDEP. I find hope in this decision but grieve for the streams and wetlands, the ruined roads and homes already affected by the way NJNG and their contractors have run roughshod over the twenty-odd miles of unnecessary pipeline already installed. I urge Governor Murphy, The NJDEP, BPU, Pinelands Commission, and Attorney General Gurbir Grewal to show NJNG what “at risk” means. Stop the Southern ReLIABILITY Link once and for all!”

“Permits for drilling operations for NJNG were stopped by the DEP. This is a big win in the battle against this destructive and unnecessary SRL pipeline. The pipeline construction has caused a catastrophe for the people living along its route, causing damage to homes. This drilling has also caused major spills, polluted streams and wetlands and created irreversible harm to surrounding ecosystems. After continued public outcry, letters to the Murphy Administration, and protests at ground zero, DEP listened. It’s important that the DEP put a stop-work order however they need to pull all permits and suspend the rule for Hazard Damaging Drilling (HDD),” said Jeff Tittel, Director of the New Jersey Sierra Club. “DEP needs to investigate the entire pipeline; they need to hold NJNG accountable and charge them for violations and damages done. There should also be a stay on this pipeline until the Sierra Club and Pinelands Preservation Alliance have our day in court.”

Most disturbingly, these recent incidents were not the first, and the occurrence of earlier accidents appears to have been kept quiet.  Advocates are working to uncover more details of these earlier events.

“For years, activists, local residents and political officials have fought to keep their neighborhoods safe from this dirty, dangerous, and unnecessary fracked gas pipeline,” said Jocelyn Sawyer, Organizer with Food & Water Action. “It is tragic that it has taken this long for regulators to act, but there is still time to stop this project entirely. The SRL pipeline would increase our state’s reliance on dirty fossil fuels, which is totally incompatible with Governor Murphy’s climate and clean energy policies. He must take this opportunity to stop the SRL pipeline, and spare residents any further drilling catastrophes.”

Until now, NJNG was drilling on Province Line Road on the border of North Hanover and Upper Freehold Townships.  A completed SRL pipeline would connect to a compressor station in Chesterfield and run 28 miles of pipe through Burlington, Monmouth, and Ocean Counties. NJNG has claimed the pipeline is for reliability and not necessity. It is disastrous for the Pinelands, which is the largest open space on the eastern seaboard and recognized for its biodiversity by the United Nations. It is also the country’s first National Reserve and holds 17 trillion gallons of water in its aquifer.

“The SRL project was approved in violation of Pinelands laws,” said Rhyan Grech, Policy Advocate with Pinelands Preservation Alliance. “There is a 17 trillion-gallon aquifer beneath the construction site, and we’re still learning just how many times NJNG has put our drinking water at risk with this pattern of construction accidents. We applaud the NJDEP for suspending the Freshwater Wetlands permit and standing up for our neighbors and our environment. Until all of the incidents are understood, it makes no sense to continue to allow trenching, while the fate of the drilling is still being evaluated. Instead of allowing further risk and a patchwork of disconnected pipes, we’re calling on the administration to halt construction completely until these accidents are fully investigated, and the Appeals are decided in court.”