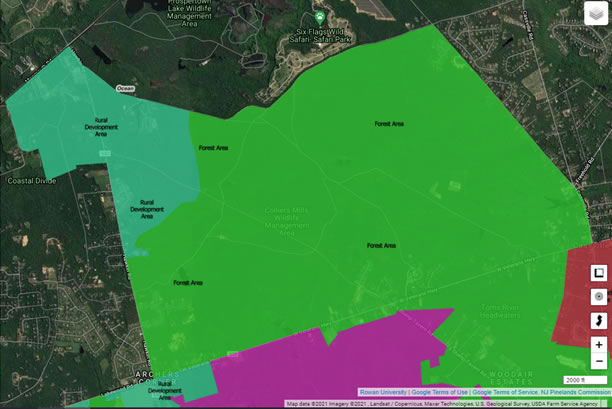 Jackson Parke South is a proposed housing development of 549 units just north of West Veterans Highway in Jackson Township. If constructed, this project will destroy one of the last remaining unpreserved wilderness areas in a unique section of the town.

Jackson Township is partially located within the Pinelands National Reserve, a federally designated 1.1 million-acre portion of South Jersey that is protected for its rare species, habitats and critical water resources. The Reserve has its own set of regulations, the Comprehensive Management Plan (CMP), around land use and environmental protections, and the lead agency charged with protecting the Pinelands and implementing the CMP is the Pinelands Commission.

However, when New Jersey passed legislation identifying the area under jurisdiction of the Pinelands Commission some parts of the Pinelands National Reserve were left out. Along the coast, those excluded sections fall within the Coastal Area Facility Review Act (CAFRA) and are managed by the Department of Environmental Protection to uphold the standards of the CMP as well as the CAFRA rules.

But part of the Pinelands National Reserve in Jackson, north of West Veterans Highway, was also inexplicably excluded from Pinelands Commission regulation. By statute it is to be controlled by the CMP regulations, but no state or local agency is expressly charged with enforcing the CMP in this area. Because of this unusual situation, Jackson Township has thus far failed to enforce the density and environmental standards of the CMP when it comes to Jackson Parke South.

The proposed site is located within the designated Forest Area of the Reserve, one of the most valuable and therefore restrictive areas in terms of allowable development. Not only have threatened and endangered species been documented on site, but wetlands and the headwaters of the Toms River are also present. These surface waters received a Category One designation by the state for their exceptional ecological and water supply resources. Protection of these waters is essential for guaranteeing the preservation of the Barnegat Bay watershed, which is vulnerable to increased development pressure.

Save Barnegat Bay and Pinelands Preservation Alliance are participating in a series of Jackson Township Planning Board meetings to raise concerns over the proposed development.

“The burden of protecting our waters starts in the western portion of the county in the woods, where creeks, streams and rivers flow out of the ground and make their way down to Barnegat Bay. Jackson’s Mayor and Council as well as their Planning Board must stand up and protect these resources for the future. The impact is not only local but extends miles downstream. This is a bad project and should be stopped. We asked Governor Murphy last April to step in and help with no response,” said Britta Forsberg-Wenzel, Executive Director of Save Barnegat Bay.

“Regardless of whether a state agency is forcing the town to comply, Jackson Township should adhere to the Pinelands laws regarding density and environmental protections,” said Rhyan Grech, Policy Advocate with Pinelands Preservation Alliance. “This parcel is designated Forest Area and is entitled to some of the strongest protections within the Pinelands National Reserve.”

The next public hearing regarding Jackson Parke South will be held on Monday, March 15 at 7:30pm. Details can be found on the Jackson Township Planning Board website.