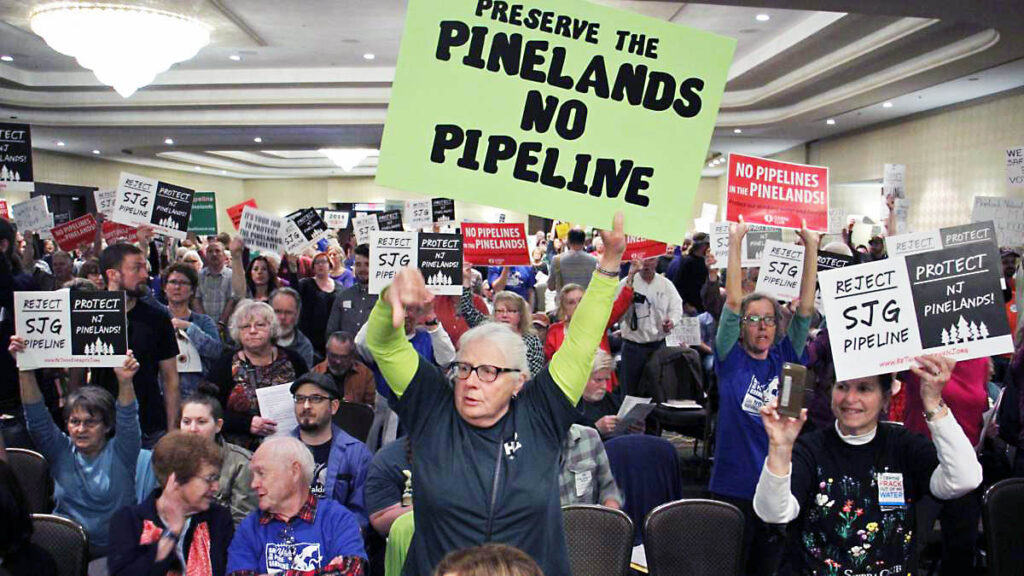 Six years to the day after the first vote on the South Jersey Gas pipeline by the Pinelands Commission, another vote failed to undo its approval.

Six years ago, on January 10, 2014, the Pinelands Commission voted on a resolution that would have authorized the Executive Director to enter into a Memorandum of Agreement with South Jersey Gas authorizing the construction of a 22 mile, 24” diameter fossil gas pipeline in the Pinelands Forest Area. In a stunning victory for the environment, the vote was tied 7-7, and without the required 8 votes to advance, the pipeline received its first defeat.

On January 10, 2020, the Pinelands Commission met in the same room to consider the same pipeline. The six years in between were filled with meetings, approvals, protests, lawsuits, court decisions, lobbying and plenty of public comments, and a new Pinelands Commission vote approving the pipeline.  But all that culminated in the defeat of the pipeline project in February 2019, when the BL England power plant owners withdrew from the project and negated the stated purpose of the pipeline. New Jersey’s Attorney General, representing the Pinelands Commission, filed a letter with the court stating that without the plant at the BL England site that would have connected to the pipeline and received the gas, the basis for the pipeline’s approval was gone. This was followed by a letter from Executive Director Wittenberg to South Jersey Gas, stating that the company would need to re-apply moving forward. All that remained was for the Pinelands Commission, and then the Board of Public Utilities, to take formal action to rescind their approvals.

Since February, the Pinelands Commission has failed to act, even after the matter was officially remanded to them by the Appeals Court with directions to reconsider the approval in light of the changed facts. Often, a lack of quorum was the problem as fewer than 8 voting Commissioners showed up for their meetings month after month.

However, the remand order clearly states that the Appeals Court sent the matter back to the Commission for “reconsideration of its approval of the South Jersey Gas pipeline project” in light of the changed facts. This means an official action by the board of Commissioners. And since both the Commission’s lawyer (the Attorney General) and Executive Director have stated unequivocally that without the BL England plant, the approval is no longer valid, it is clear that the Pinelands Commission must definitively vote and pass a resolution stating the same. PPA and our partner on the previous appeal, NJ Sierra Club, are currently examining our options to compel the Commissioners to act. You can also make your voice heard by reaching out to the Pinelands Commission at 609-894-7300 .