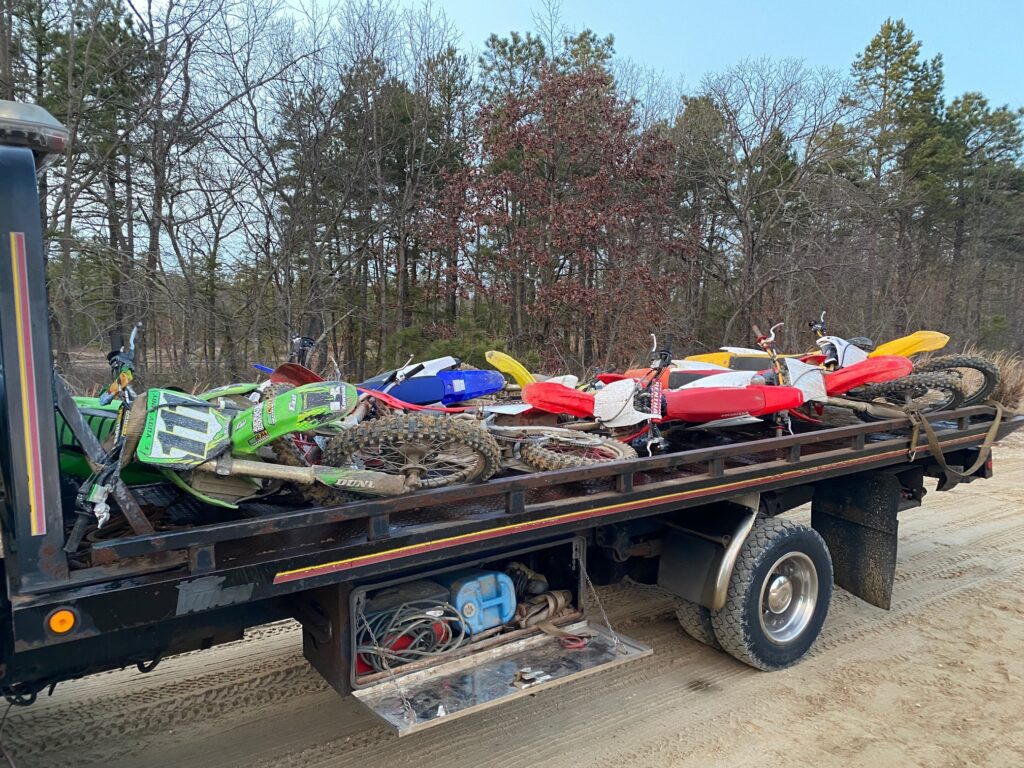 The bust at Winslow WMA reveals bigger issues with land management by the state of New Jersey.

On Sunday, February 9th, a group of 100 or more ORV users confronted and taunted responding law enforcement officers in the Winslow Wildlife Management Area (WMA) at the site of a former upland forest, turned into a sand-mine and lake. This area is often inaccurately referred to as a blue hole, although the resulting lake caused by mining below the water table does have turquoise color.

According to a report by the Winslow Police Department, the responding officers were taunted by some as others fled the scene, although police were able to impound 14 of the vehicles and issue 16 summons. None of the impounded vehicles had insurance or registration. This was a welcome enforcement action by the Winslow Police (who had backup from NJ Conservation Officers and NJ Park Police). We need to support them by reducing the need of enforcement through effective land management by the state agencies responsible for these areas such as NJ Fish and Wildlife and NJ Parks and Forestry.

Some background on Winslow WMA. After the mining corporation extracted the mineral wealth from the land, the resulting lake and remaining uplands were sold to the State of NJ to be included in the Winslow WMA. Unfortunately, once acquired, there was no vision or intention set forth for the land. Thus, the area became defined by those who sought out of sight places for dangerous and destructive activities that are not compatible with public spaces.

The only example in the Pinelands where this has been avoided at a former sand mine is the Egg Harbor Township Nature Reserve. Instead of allowing a vacuum of management and law enforcement to form after the land was abandoned by the mining company, the township planned and created a preserve where township residents and visitors could enjoy the area with peaceful, active recreation like walking, biking, bird-watching, paddling, and more.

The State of NJ has not taken this approach with any of the former sand mining sites under its management. Instead, these places have been left to their fates and most have become havens for illegal activities such as illegal dumping and off-road vehicle use. We often hear from casual observers that these areas just need increased enforcement, but that is a very limited viewpoint. Enforcement is only one part of the solution. It is more important to establish what people can and should do in these areas.  If a large open space, out of direct sight, is left undefined it will always become a haven for activities that are prohibited and unwanted elsewhere. In the resulting mess, those who would otherwise be enjoying the land no longer feel safe to go there.

The state agencies responsible for these areas, namely NJ Fish and Wildlife and NJ Parks and Forestry, should design recreation plans that define these spaces for public use and rebuff the destructive behaviors that are going on there today. These areas need marked walking trails, ADA accessibility, visitor signage, online guides, parking areas, and a social media presence.  Without this intervention, we will continue to lose large swathes of our open space to destructive activities.  Occasional enforcement of rules and regulations will not solve this problem as destructive users will just wait “for the heat to die down”.

This issue must be met with a focused vision for our public lands and that process should start now. Take action by signing our petition to the Department of Environmental Protection to stop this kind of damage and protect our public land.

3 responses to “ATV Riders Tear up Pinelands – Get Caught”