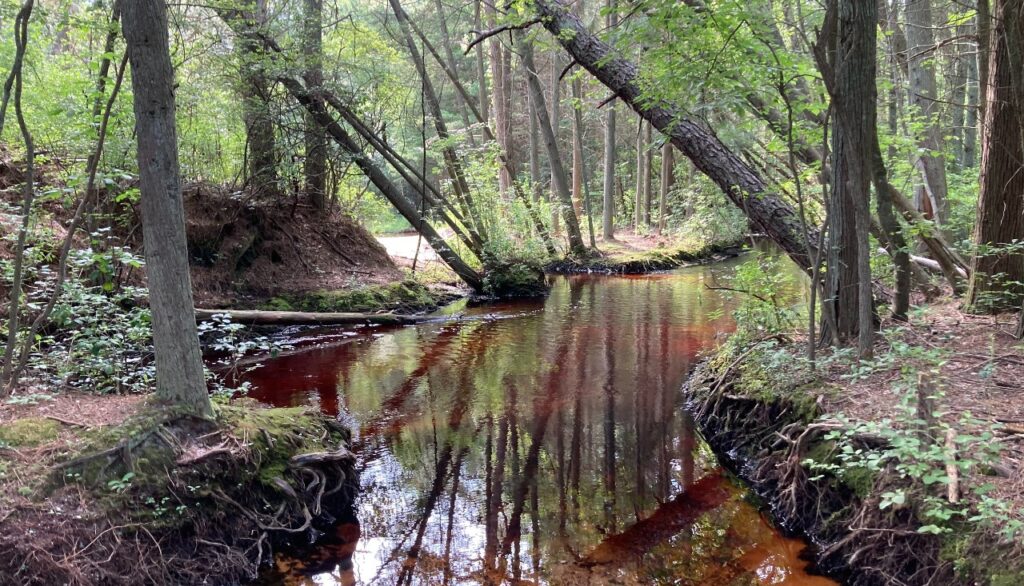 New Jersey needs to focus on positive uses of its public land. That might be the only way to save them.

In Atlantic County, Hamilton Township, there exists a stream called the Gravelly Run. It is a cool, clean, and crisp Pinelands stream that runs along a gravelly bank on the way to the Great Egg Harbor River. Much of the watershed is contained by lands held by the State of New Jersey’s Natural Lands Trust which named the area the Hamilton Preserve.  The stream and area around the Gravelly Run hosted one of the first sawmills in the region, a small sandpit, wagon trails, and in more recent years an antique book shop that’s turned into a florist shop.  It has for generations been a treasured recreational area, highlighted best in the poem Gravelly Run by A.R Ammon:

I don’t know somehow it seems sufficient
to see and hear whatever coming and going is,
losing the self to the victory
of stones and trees,
of bending sandpit lakes, crescent
round groves of dwarf pine:
for it is not so much to know the self
as to know it as it is known
by galaxy and cedar cone,
as if birth had never found it
and death could never end it:
the swamp’s slow water comes
down Gravelly Run fanning the long
stone-held algal
hair and narrowing roils between
the shoulders of the highway bridge:
holly grows on the banks in the woods there,
and the cedars’ gothic-clustered
spires could make
green religion in winter bones:
so I look and reflect, but the air’s glass
jail seals each thing in its entity:
no use to make any philosophies here:
I see no
god in the holly, hear no song from
the snowbroken weeds: Hegel is not the winter
yellow in the pines: the sunlight has never
heard of trees: surrendered self among
unwelcoming forms: stranger,
hoist your burdens, get on down the road.

However, the capacity of the land managers and enforcement agencies has been recently overwhelmed by the force of some individuals seeking to change the use of land for their own purposes, namely illegal dumping, and off-road vehicle use. It is the same destructive force that land managers and Pinelands advocates are struggling against throughout the Pinelands. It usually takes the form of a small group of individuals, unconcerned with the law, who are set to vandalize parks and preserves in order to further their narrow use of the land against the will of the community.

Pinelands Preservation Alliance advocates for a broad reenvisioning of how lands are managed by the New Jersey Department of Environmental Protection (NJDEP) and other agencies. Instead of focusing on what the public cannot do (as is so often the case), the focus should now be on what the public can do in these spaces. Signs often read NO SWIMMING, NO FIRES, NO VEHICLES, but that strategy has proven ineffective. At present, there are no structured recreational activities being promoted at the Preserve, with the exception of the county bike trail which runs through a portion of it. Meanwhile, a small and aggressive set of individuals have decided for themselves what types of activities they will engage in, often to a great detriment to the land. We need to designate recreational areas in these places that are both compatible with the habitat and in high demand in the community. This measure, combined with steep penalties for those that engage in undesignated and destructive activities, is our only hope of turning this situation around.

If demand is high enough, and public agency budgets and staffing are too low, then we should look at alternate means of promoting sustainable recreation. In some areas, perhaps concession agreements and fee areas can fill the void. All public lands and funded parkland have the legal ability to establish fee areas and to craft concession agreements. The concessioners will have a strong economic and personal interest in maintaining order to benefit all and the public will be provided with services and an increased sense of safety in the area. The local police will also generally have more of an interest in protecting paying customers and a prospering business than protecting habitat or stream quality, even though these things are of equal importance they do not rate as high on the priority lists.

We also must name these places appropriately. Naming has the immediate effect of categorizing the world around us and the mental world inside of us. The public does not know what a preserve is or what they are supposed to do in one, thus conflict ensues. The term “Park” is immediately recognized by a majority of the public, but there may still be some confusion on the scope of activities or facilities provided. What may work better is to name the lands for the recreational activities we want to predominate based on the needs of the community and specific habitat concerns. For example, if one chooses to go to a golf course, they know exactly what is expected of them and what they expect will be provided to facilitate their recreation. Perhaps, instead of the “Hamilton Preserve”, we call the area the “Gravelly Run Hiking and Biking Natural Park”. We can also have signs that say FISHING ALLOWED, KAYAKING ENCOURAGED, as well as the obligatory NO MOTOR VEHICLES and NO FIRES, and NO LITTERING.

Swimming, a relatively harmless activity in most respects, is also one of the most difficult to deal with because of the need for trained lifeguards. Demand for swimming areas is at an all-time high and the supply in our area is at an all-time low. This is also an issue of social justice since residents with access to private pools and other private swimming areas are generally higher-income households. Lower-income households are less likely to have swimming areas or high-powered efficient air conditioning and depend on public swimming areas to cool off and recreate. As summers become hotter and hotter as global warming advances, the ability for residents to have access to swimming areas has never been more important. Hiring lifeguards or even establishing concession agreements to run swimming areas in those locations already experiencing unsupervised swimming is good for the community and for the land. NJDEP faces the challenge of adapting to modern times.

The fractured, balkanized bureaucracy, that governs the Pinelands has never been in worse condition, but the success of the Green Acres program means that more and more land will be under their control. This bureaucracy needs to recognize its challenge and release some of its control over the lands it manages because – in many cases – it manages the land on paper only, without any real control over the physical reality on the ground.

One of the great bright spots in this situation at the Gravelly Run is the hands-on activism and advocacy that residents have taken on to make the preserve a better place. The Friends of the Gravelly Run, a loose citizen coalition started by Denise Appleget has proven to be an effective means of advocacy for the benefit of the area and the community. Her advocacy has led to an increased level of attention on the area, multiple cleanups, actions by the New Jersey Natural Lands Trust try and reduce ORV damage, and increased patrols. Now is the time to decide on what the vision for the future for the Preserve or Park will look like and find a way through the bureaucracy to implement it.