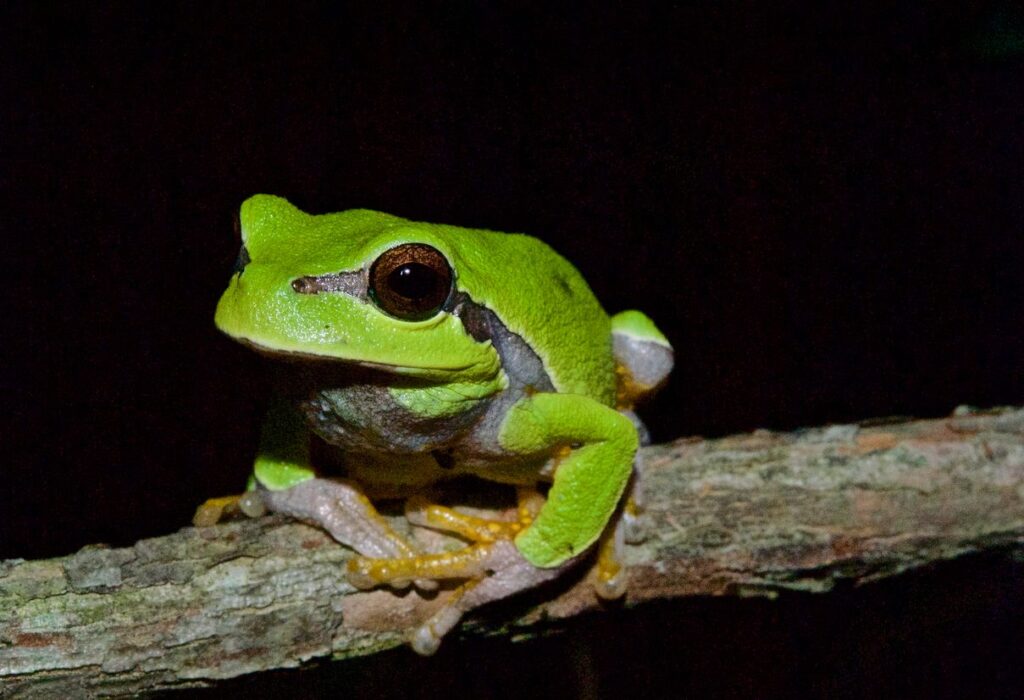 Summer is still here and with it comes the soothing and sometimes booming sounds of frog calls at night. In the pine barrens, this could be anything from eager spring peepers who are still at it, to the constant trill of grey treefrogs and chirps of cricket frogs, or the nasal quack of our very own pine barrens tree frogs. Summer nights would not be the same without their calls. That is why we at Pinelands Preservation Alliance (PPA) want to make sure our amphibian neighbors are actively calling at night.

When frogs call, it is always the male trying to attract females. Each species has its own distinctive call, and males “duke it out” in the pond or wetland for a space from where to call. In some cases, like with bullfrogs and green frogs, males call from their own “bachelor pad” and will defend this territory where females can eat and lay their eggs. Females will mate with the male who “owns” that piece of prized real estate in the wetland. Other frogs, like grey and pine barren tree frogs, simply find a spot near a pond where they can call and give their all, competing with other frogs for a spot from where to call. Females in turn, gauge the male’s genetic quality based on their calls and chose the one that better suits them.

In the case of Fowler’s toads and spadefoot toads, which are what we call explosive breeders, they simply come out in huge numbers after big rains and gather in flooded fields to call and mate at the same time in a wild frenzy. We study this cacophony of frogs and try to identify how many species of frogs are calling in a particular place and also estimate the numbers of males calling in a given area. By getting these two data points (number of active frog species, and how many individuals of each) we can learn a lot about a particular piece of land.

We know what different frogs, like pine barren tree frogs and carpenter frogs, need to thrive in terms of water pollution and chemistry, age of the forest, and level of land degradation, and we also know where they should live. So, it’s almost like a scavenger hunt, the more frogs of a certain species we find in a place, the better protected it is. On the other hand, some frogs, like bullfrogs, shouldn’t even be in the pine barrens, as the original waters in here were too acidic for their liking and the forests were not fit for bullfrogs. With deforestation, changes in land use, and changes in soil chemistry to improve agriculture, much of the pinelands became good for them. Bullfrogs eat other frogs and can carry diseases that affect other frogs, so their presence in the pinelands, often means that the forest has been completely altered and that the local frog species may be in trouble.

We have been monitoring urban areas as well as patches of forest to better understand what species are more active in these areas.

Northern gray tree frog calls can be heard all over New Jersey. They prefer to breed in small ponds near wooded areas, but have adapted to humans and inhabit urban settings calling from pools in people’s back yards

Pine Barrens tree frogs are the jewels of the pinelands. They depend on pine forests and clean water to survive, but their populations are declining in the state.

Northern cricket frogs sound a little bit like a cricket and love to call from ponds next to the woods.