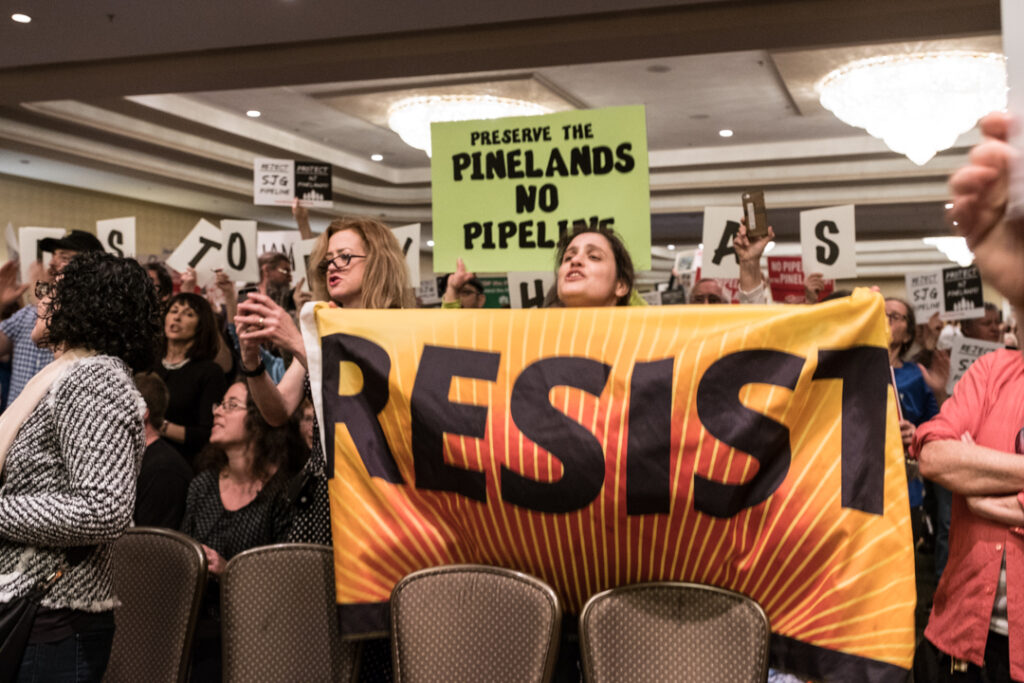 Eight months have passed since the controversial South Jersey Gas pipeline was defeated. PPA along with residents, activists, and community groups spent six years fighting the proposed fossil gas pipeline that would have cut through the protected Forest Area of the Pinelands National Reserve.  In late winter 2019 we were all thrilled to read two short letters signaling the end of the project.

First, a letter from NJ’s Attorney General stated that the owners of the BL England power plant, located in Upper Township and slated to receive the fracked gas, had withdrawn from the project. With nowhere for the gas to go, the basis for the pipeline’s approval was gone.

The second letter, from Pinelands Commission Executive Director Nancy Wittenberg, notified South Jersey Gas that the Commission’s approval of the pipeline was no longer justified, and the private utility would need to reapply for any future projects. Our collective hard work and opposition delayed the project and bought just enough time for the pipeline rationale to disappear. A true victory for the air, water, wildlife and residents of the Pinelands, yes?

A few final To Do’s included officially rescinding the pipeline’s approvals. Since the approval by the Board of Public Utilities was contingent upon the Pinelands Commission’s approval, the latter agency needed to act first by passing a resolution. The Commission proposed a resolution in April that wound up being tabled due to a last minute objection from South Jersey Gas. In May, the appeals court (because PPA and others had filed suit after the approval) officially remanded the case back to the Pinelands Commission, and now nothing stood in the way of the vote. Yet five more months passed…

Let’s take a quick break and discuss the structure of the Pinelands Commission. The 15-member board is served by 7 gubernatorial appointees, 7 from the Pinelands counties (one from each), and one representative from the federal Department of the Interior. Currently, one of the gubernatorial seats and the federal seat stand vacant. Additionally, some gubernatorial Commissioners have indicated a desire to step down from their post.  Others have not shown a commitment to protecting the natural resources of the Pinelands.  We were very pleased to see the Governor make a series of nominations staring in January.  Governor Murphy nominated four highly qualified conservationists to replace sitting Commissioners and fill the vacant seat, plus re-nominated Ed Lloyd, a dedicated Pinelands advocate who has served since 2002. Another victory for the Pines, yes?

Nominees for these types of positions must be confirmed by the state Senate. One of the first steps is a vote in the Senate Judiciary Committee. The first nomination was made in January, yet month after month none of the nominees appeared on the agenda. Were these nominees bargaining chips during the budget process over the summer? Possibly. Were they de-prioritized during the election season? Definitely. Whatever the reason, four willing and capable candidates for the Commission wait in the wings, while the Pinelands Commission has struggled to achieve a quorum each month, with 8 votes needed to pass or reject a resolution.

So back to the November 8th Pinelands Commission meeting. For the first time in months, the South Jersey Gas pipeline appeared on the meeting agenda.  Finally, at long last, it seemed that enough Commissioners would be available to vote, rescind the Commission’s approval, and be done with South Jersey Gas for good. However, the language in the new resolution had been changed from its April counterpart. Instead of a clear statement on the pipeline’s non-compliance with the Pinelands regulations, and a strong withdraw of the Commission’s approval, this resolution merely stated that South Jersey Gas could not proceed with the pipeline. The reason for this change is unclear; during the meeting, the Executive Director stated that the language came from the Commissioners themselves but offered no additional information. Members of the public attending the meeting expressed their frustration and disappointment in the new resolution prior to the vote, but that may not be the reason why the vote never happened.

As it turns out, only 7 Commissioners attended the November 8th meeting. One of them recuses himself on all South Jersey Gas matters, leaving only 6 Commissioners present who could possibly vote. A solution appeared imminent as two additional Commissioners joined the meeting by phone. However, it quickly became clear that both were having difficulty hearing what was happening in the room, and by the time public comment on the pipeline was over, both calls had dropped. Without a quorum, the Commission skipped the vote. It remains to be seen what action, if any, South Jersey Gas could take if the resolution passes as currently written.

Several major issues on which PPA has been laser-focused came to a head in that perfect storm of a meeting. The South Jersey Gas pipeline is dead, but the approvals have not been officially revoked. Excellent gubernatorial nominees have been made to the Commission, but the candidates haven’t been brought up for a vote in the Judiciary Committee. (And as a side-note, the Commission is in need of a major telephonic system upgrade.)

These troubles will continue if the Senate fails to approve the Governor’s nominations to the Pinelands Commission.  It is clear that some of the sitting Commissioners can’t be bothered with attending the monthly meetings, and without a quorum, nothing will be decided. The experience and expertise of the four candidates nominated by the Governor give us a glimpse of a Pinelands Commission that is committed to preservation, dedicated to its duty as steward of the Pines, and consistent in its integrity and fidelity to the Pinelands regulations. If you share that vision, please urge Senator Addiego, who needs to sign-off on one of the nominees, to move the process forward today!