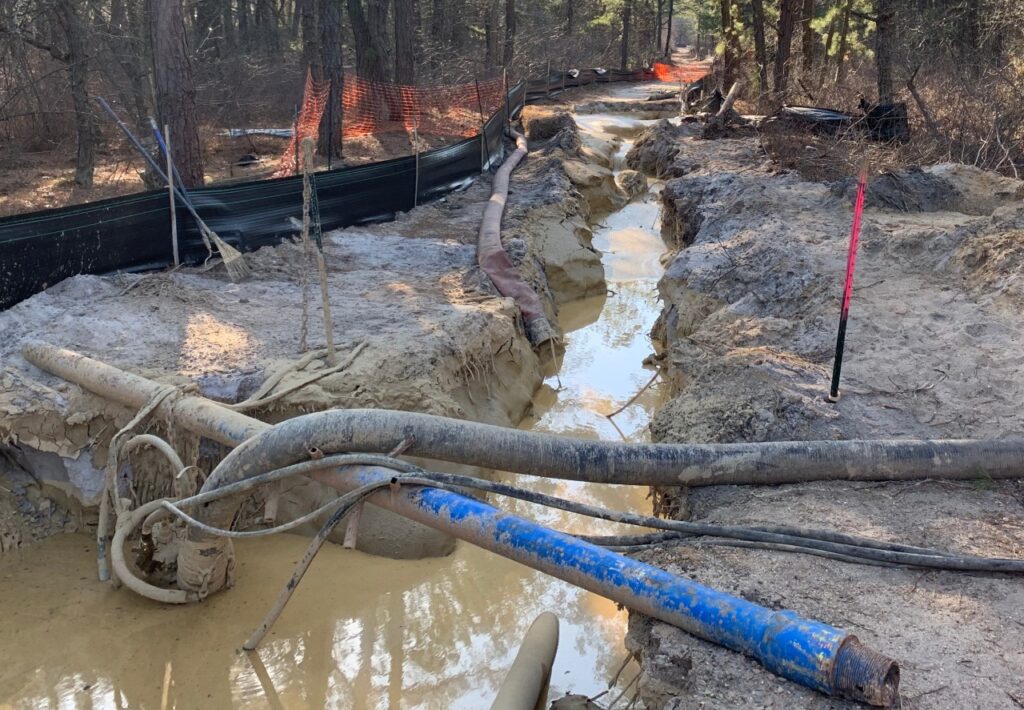 Pipeline opponents call for investigation into pattern of drilling spills

When the Pinelands Commission’s next monthly meeting takes place on March 12, it’s important that anyone who cares about public health and safety — and holding public officials accountable when they don’t protect health and safety and then cover up their inaction — makes their voices heard.

The Southern Reliability Link (SRL) pipeline being built by the New Jersey Natural Gas company (NJNG) uses a risky technique called Horizontal Directional Drilling (HDD) that has caused dangerous spills and is to blame for a devastating accident that cracked the foundation of a woman’s house in Upper Freehold and left it uninhabitable.

Numerous spills polluted streams and wetlands — and six spills in the Pinelands weren’t made public until after the Upper Freehold debacle. That lack of accountability must be addressed.

SRL is a 30-mile pipeline that NJNG claims would provide redundancy to existing service. The company admits the pipeline would only be used in an extremely unlikely case of a catastrophic failure at a particular, single point in its system; independent reports have debunked that argument. Rather than undertake a shorter, less expensive approach that would avoid the Pinelands, NJNG chose a long, expensive and ultimately more profitable new pipeline that, if completed, will run through Chesterfield, Upper Freehold and Plumsted, then cut through Joint Base McGuire-Dix-Lakehurst and into Manchester.

Though NJNG touted the HDD process as a safe alternative to digging open trenches for pipeline construction, it has a documented 50 percent failure rate. HDD failures amount to unpermitted release of drilling sludge, chemicals and fluid that can pollute water and in other ways damage the environment near construction areas.

At a meeting of the Pinelands Commission last July, members of the public and Commissioners themselves were surprised to learn for the first time of six spills in 2019 that the Commission staff had not previously disclosed. The construction accidents took place inside the Pinelands portion of Joint Base McGuire-Dix-Lakehurst, where New Jersey Natural Gas spilled more than 1,300 gallons of drilling sludge into wetlands and forests.

The Pinelands Commission — whose mission is to “preserve, protect and enhance” the Pinelands National Reserve’s one million acres of drinking water sources, rare habitats and wetlands — failed to reprimand NJNG for the spills or its own executive director for withholding information about them from Commission members and the public for a year and a half. A full investigation of these actions needs to take place.

Before and since the state gave NJNG permission to build the pipeline in 2016, residents, community groups and experts participated in every step of the process. Time after time, they attended hearings and testified about the likelihood of drilling accidents and the significant risk that would result for residents and the environment. The state Department of Environmental Protection (NJDEP), the Board of Public Utilities and the Pinelands Commission issued their approvals anyway.

Despite massive turnout of opponents at municipal and county government meetings, counties also approved NJNG’s plans without question, and the towns that originally objected eventually settled with NJNG due to financial constraints. No public agency conducted any serious examination of the facts and the risks. NJNG and other pipeline builders have shown how much damage can be inflicted by mere construction — before high-pressure gas even starts flowing through the pipeline.

After the Upper Freehold incident, NJDEP suspended NJNG’s construction permits, but they were reinstated in November and drilling has restarted in Chesterfield. Opponents of the pipeline have launched court challenges. No matter how those appeals are resolved, this disturbing pattern of destructive incidents must be investigated. It’s the common sense thing to do in the face of so much evidence of the dangers this construction presents.

Please attend the virtual meeting and then join by phone so your voice is heard. The meeting will be live-streamed on the Commission’s YouTube channel, starting at 9:30 am. During the public comment portion of the meeting, call 1-929-205-6099 and enter meeting ID: 833 5477 1666 to be heard.