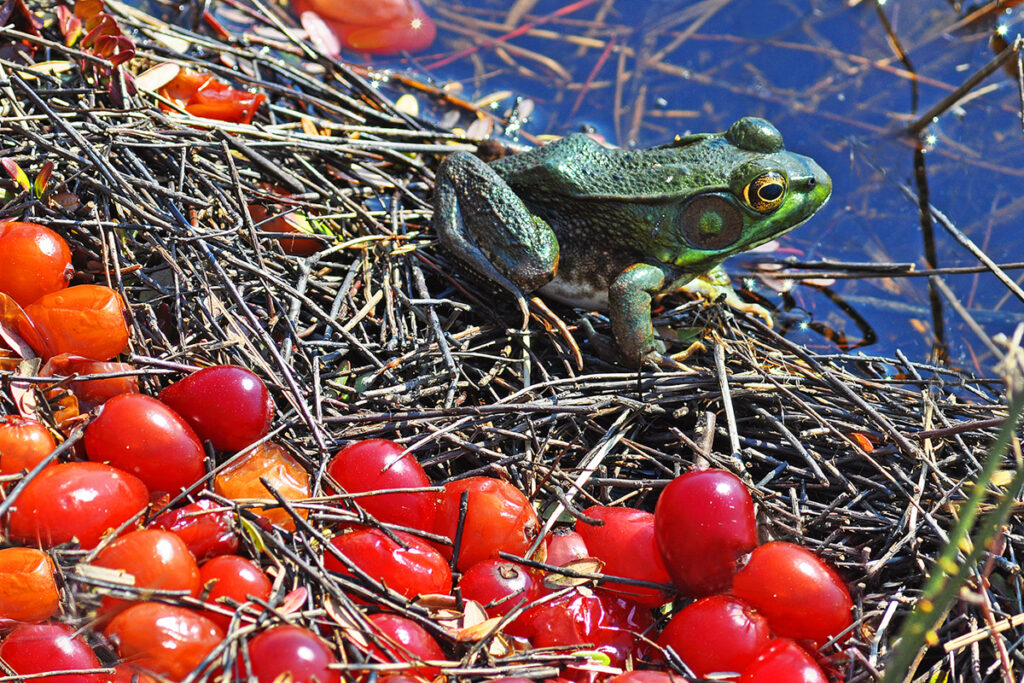 Cranberries in the Pinelands

Exciting News! Pinelands Adventures, an initiative of Pinelands Preservation Alliance, offers a limited number of Cranberry Tours during the month of October. If you are interested in attending and want to reserve a spot visit their website here!

Ah, autumn time in the Pine Barrens. The hours of sunlight we receive per day are decreasing and we are greeted with cool, brisk mornings and lower temperatures as we move into winter. We are also graced by nature’s display of yellow, orange, and red leaves from the deciduous trees that make their home amongst the verdant green of the pines. Autumn time may also flood your mind with the memories and excitement of foods typically made from this season’s harvest, like butternut squash soup, pumpkin pie, baked potatoes, and cranberry sauce. Let’s take a deeper look into cranberries, sometimes known as the “rubies of the pines”.

Cranberry, Vaccinium macrocarpon, is a perennial fruit native to New Jersey’s Pine Barrens that grows on low-lying shrubs and vines. The cranberry is red in color and tart in flavor when ripe. These native fruits thrive in the Pine Barrens because the ecosystem has exactly what they need; acidic boggy soil, an adequate supply of water (thank you Kirkwood-Cohansey Aquifer), and a growing season of three months of winter weather to create the conditions needed for flowers to bud in the springtime. The commercial production of cranberries relies heavily on clean water and the health of the wetlands ecosystem it exists in, as well as the surrounding woodland and proper management of the watershed.

Native Americans built a connection with the wild cranberries found in the Pine Barrens. The Natives viewed cranberries as a source of food, a way to make dyes, and an astringent medicine that could be used to help reduce bleeding from minor abrasions to the skin. One unique way that Native Americans consumed cranberries was by creating pemmican, a protein-rich meal made with dried venison, melted animal fat, and crushed cranberries. Pemmican served as a food source through the winters since it was preserved.

Fast forward to the mid-1800s when the first attempts to cultivate cranberries commercially were documented. Farmers tried to introduce cranberry vines into wild bogs, often with many failures that prevented the farmers from cultivating cranberries commercially. Luckily for cranberry farmers, George Cook, a New Jersey State Geologist and Professor of Chemistry at Rutgers University, discovered that swamp muck was the most beneficial fertilizer to use for cranberry production. Cook also documented that controlled flooding in the cranberry bogs was needed to prevent the vines from freezing in the winter and to remove detrimental insects during the springtime.

With the new growing insight, commercial cranberry production took off near Pemberton, NJ for James A. Fenwick and his son-in-law Joseph J. White, both cranberry farmers in a place now known as Whitesbog Village. During the early 1900s, Whitesbog Village was the largest cranberry farm in New Jersey. Thanks to White’s efforts and research, the commercial cranberry industry was now aware that successful harvests could occur in the Pine Barrens, a place once considered too acidic for most agriculture.

White’s oldest daughter, Elizabeth Coleman White, helped her father with the growing of cranberries but she is perhaps best known for her work with USDA scientist Dr. Fredrick Colville to cultivate another popular native fruit in the Pine Barrens, the blueberry.  You can visit historic Whitesbog Village, located in Brendan Byrne State Forest, to hike and learn about the culture and history of cranberry and blueberry farming in New Jersey.  Learn more at www.whitesbog.org.

Originally, cranberries were harvested by hand, requiring many workers and hours of hard physical labor. Next, large wooden scoops were used; now, the wet-picking method is the predominant way to harvest cranberries. The wet-picking method consists of flooding the cranberry bogs and using a machine to remove berries from the vines so that they float to the surface. These cranberries are then collected and sent to a sorting house for cleaning and processing. Some cranberries are sold raw, and some are sent to production facilities to be created into cranberry products such as dried cranberries, sauce, jam, juices, and more! A fun fact about cranberry sauce is that it was created by Elizabeth Lee, a cranberry farmer based in New Jersey. Lee eventually joined forces with Marcus Urann, a cranberry farmer from Massachusetts, to start the well-known Ocean Spray company, which consists of hundreds of cranberry growers.

Just like any form of agriculture, the environment can be negatively impacted by certain farming practices. Commercial cranberry farming, at least in New Jersey, typically involves the application of inorganic pesticides. Rutgers University’s Philip E. Marucci Center for Blueberry and Cranberry Research works closely with farmers to minimize the use of pesticides in cranberry growing. In addition, while cranberries are a native plant, commercial cranberry bogs are “monocultures” of a single plant species with little or none of the biological diversity found in a natural wetland.

As you come across cranberries on your plate this season, or while out in the Pine Barrens, we hope that you take a moment to recognize all the history behind the “rubies of the pines”. The Pine Barrens hold the unique habitat that cranberries need to thrive, and it is a spectacular sight to witness a sea of red amongst the green backdrop of the pines during harvest season.