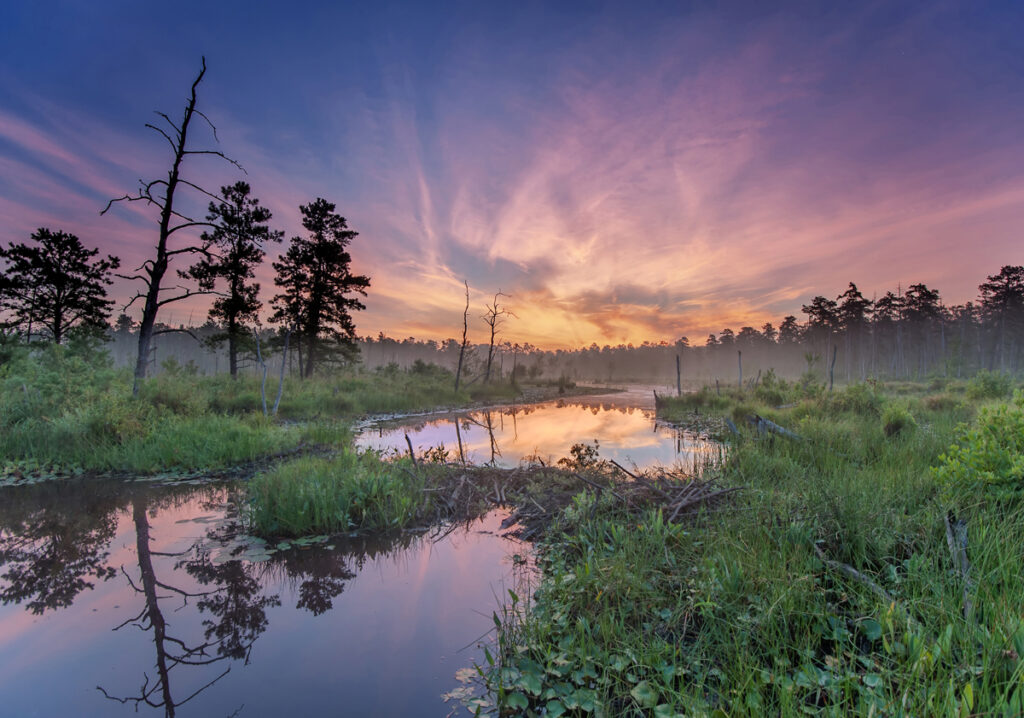 Sunrise on the Mullica River by photographer Ernest Cozens.

Citizens Organize in the Pines

Residents successfully organize in Shamong Township to protect the Pines and quality of life.

In January Tuckerton Turf Farm applied to the Pinelands Commission and Shamong Township to allow development of 40 soccer fields and 3,000 parking spaces on about 40% of their farm on Stokes Road in Indian Mills, Shamong Township, Burlington County.

The proposal would have allowed 15 massive soccer tournaments each year, with thousands of cars arriving for each tournament into a neighborhood of homes, farms and small businesses. Indian Mills is located in an Agricultural Production Area of the Pinelands National Reserve, and the municipal zoning does not allow high-intensity recreation events.  It is also a preserved farm, which means that only agricultural activities are allowed on the land.

The application claimed that the soccer games were an agricultural marketing strategy, advertising the turf grass the same way a blueberry festival advertises that crop. Elite Development Program Soccer (EDP) is one of the largest organizers of youth soccer leagues and tournaments in the United States. EDP would have paid an undisclosed amount of money to the turf farm to run their tournaments there.

Residents concerned about traffic, environmental impacts, noise and other issues started organizing. They contacted the town and started a petition. The project was presented to the Shamong Joint Land Use board on January 21,2020.  About 150 residents attended the meeting, and the petition signatures were up to 1,500. The Board voted unanimously that the project does not comply with Shamong’s zoning ordinance. Afterwards, the turf farm announced it would not pursue this project.

The same company, EDP, runs tournaments on Tuckahoe Turf Farms in Hammonton, a project that PPA opposed and challenged in court several years ago. In that case, the landowner got a state law as passed to include soccer tournaments in the definition of “low impact recreation,” a piece of double-speak that changed the definition of permitted low impact recreation under Pinelands rules but not municipal zoning. In PPA’s appeal, the court punted on our point that the public had purchased a conservation easement that expressly forbids use of the land for playing fields, so that issue has yet to be decided.   The Appeals Court in that case set the terrible precedent that Pinelands rules can be changed to benefit a particular landowner with the right political connections.

Congratulations to the residents of Shamong Township who were well organized and vocal about their opposition to this project.  They won the day!

2 responses to “Citizens Organize in the Pines”