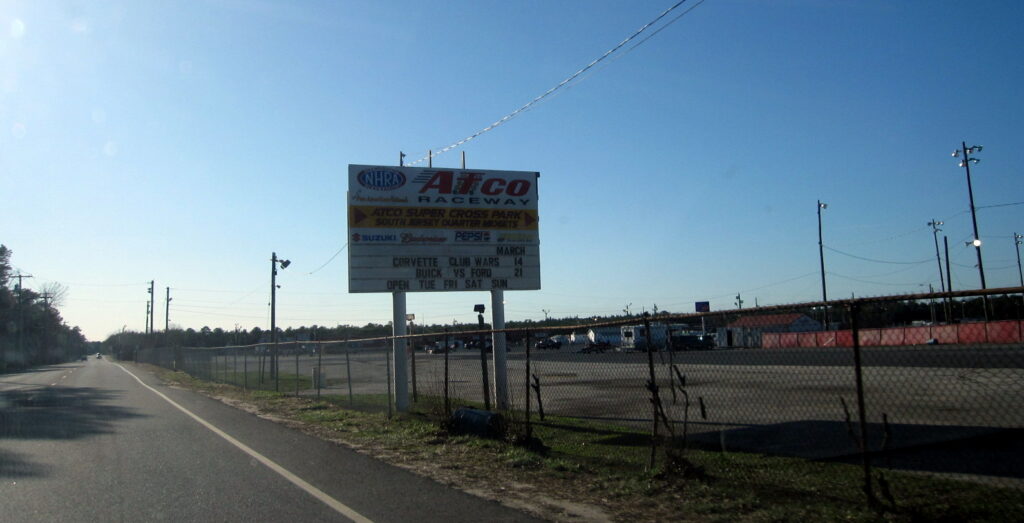 A proposal to convert the Atco Dragway to an automobile auction raises concerns.

A cultural landmark in the Pinelands, the Atco Dragway, is being proposed to be converted into an automobile auction storing thousands of damaged cars.  PPA has several concerns about the impact of this kind of operation on the edge of Wharton State Forest and along the Mullica River.  On the one hand, the existing dragway would likely not be considered an ideal use from an environmental perspective if it were being built today.  Nevertheless, the site preexists the adoption of the Pinelands laws and was grandfathered in under the Comprehensive Management Plan.  In the case of the proposed automobile auction, there appears to be a potential new environmental risk of a larger scale.  The fundamentally different nature of a racetrack for maintained, functioning cars versus a facility storing thousands of cars, many of which may be damaged and potentially leaking various fluids and chemicals, requires a closer investigation of the impact on water quality.

Furthermore, as was discussed in the Waterford Township Planning Board meeting on February 17, we feel there are unanswered questions surrounding the nature of the proposed use itself and whether it is permitted under the Township’s code.  The applicable ordinance allows “Automobile new and/or used sales and service establishments” as a conditional use on part of the parcel but is unclear on whether the type of business proposed would fall under that provision.

Closing a legal, contained recreational site while there is so much illegal, destructive recreation occurring in the Pinelands nearby would be a poor outcome for the region.  It is abundantly clear from the amount of public feedback on this project that the Dragway is highly valued by many people.  We are hopeful that both the Waterford Township Planning Board and the Pinelands Commission will demand further analysis of the issues above before approving this project. We encourage others to call in to the Planning Board’s next meeting on March 1, 2021 and express their concerns.  Information can be found on the Waterford Township Planning Board website here.

The Waterford Township Joint Land Use Board is meeting on July 19, at 7:00 PM and the automobile auction is on the agenda. This may be the last hearing on the issue before the Board takes a vote.

During a recent hearing on the proposal, the Board called to attention a provision of the Township’s code that requires stored inoperable vehicles to be drained of gasoline, which the Auto Auction applicant does not do at its facilities.  As a result, the applicant is now requesting an exception to this ordinance requirement.

We encourage you to call in and provide public comment on this issue.  Find the meeting information here.

Beginning Monday, July 19th, 2021 at 7:00 PM, the public can access and participate in the meeting via Zoom using this link and the following information: