Threats to the Pinelands

Despite the protections put into place four decades ago, the Pinelands faces numerous threats.

The Pinelands protection program of laws, policies and land protection has been very successful over more than 40 years. But the Pinelands is always at risk. We see the key threats today as:

The Pinelands would not exist today without local, state, and federal leaders, and it cannot continue to exist without significant leadership. And the best laws in the world will be twisted out of all recognition if the wrong people are in charge of implementing them.

The governor, legislators and Department of Environmental Protection also play key roles. In addition to nominating Commissioners and choosing the Chair from among them, the governor exercises great influence of virtue of the office and can veto any decision of the Commission. Legislators often are presented with proposals for new laws to strengthen or, more often, to weaken Pinelands and other environmental protections. And the DEP implements important environmental laws and policies that have a big effect on the Pinelands, like water quality protection and the allocation of fresh water from aquifers for human uses.

Learn more about our current work regarding the Pinelands Commission here.

Public’s Lack of Knowledge About the Pinelands

An active, vocal public is essential to ensuring government leaders and agencies implement and improve the Pinelands Plan and other environmental protections on a consistent basis, year in and year out. Otherwise, powerful economic and political interests will prevail on the Pinelands Commission, DEP and lawmakers to get their developments approved regardless of the terms and intent of protection laws. We’ve seen this happen, most recently in the Commission’s approval of natural gas pipelines that plainly violate the Pinelands rules. If the public doesn’t know about the Pinelands, doesn’t see how its protection is a benefit to them and their families, or isn’t motivated enough to tell officials they demand protection, then the Pinelands will fail.

What this means:  Those of us who know and care about the Pinelands already have to share that knowledge. We have to make the case that the Pinelands benefits everyone by providing clean and plentiful water, cleansing our air of pollutants and greenhouse gases, giving us close-by places to have fun exploring the natural world, and providing safe havens for the plants and wildlife that may not survive on Earth if they do not survive here.

Poor Stewardship of our Open Spaces

State Forests and other preserves in the Pinelands are being devastated by unlawful off-road vehicle activities, suppression of natural forest processes, poaching of rare plants and wildlife, and dumping of trash and chemicals.  The abuses have grown while the funds devoted to law enforcement and conservation agencies to protect public lands from these depredations have shrunk.

What this means:  The abuse by Off-Road Vehicles has several bad impacts affecting hundreds of areas in the Pinelands: roads that ought to be safe to drive are dangerous because of large pits and ponds ORVs have created by “mudding” (spinning wheels); emergency services like fire fighters and EMS cannot use roads because they are impassible; ponds and wetlands are destroyed and denuded of life; and forest patches are turned into deserts.  Poaching has destroyed numerous local populations of rare plants and wildlife.  And dumping not only ruins the experience of nature we should all be able to enjoy, but also leads to the spilling of contaminants like oil into the soil and groundwater.

Degradation of our Water Resources

Development brings contamination of ground water, streams and ponds and pumping of the Pinelands Aquifer.  The Kirkwood Cohansey Aquifer is embedded in the sands of the Pinelands and serves millions of year-round and seasonal residents as well as extensive farming. Poorly planned wells and stormwater from developments degrades this 17 trillion gallon water resource that is vital to the Pinelands very existence.  Evaluating developments for both these impacts and stopping projects that may have an irreversible impact is necessary to protect the Pinelands integrity.

What this means:  Numerous streams and wetlands have been “over-fertilized” with nutrients flowing from developed lands through the aquifer and directly into surface waters, resulting in the loss of native plants and wildlife that are adapted to acidic, low-nutrient conditions.  Barnegat Bay is a large-scale case study in this process, as contaminated water flows into the Bay from the northern part of its watershed (which is outside the Pinelands protection area) and even from development along the Route 9 corridor and barrier islands.  As a result, Barnegat Bay has lost much of its natural life, with populations of seagrass, hard clams crashing over the decades of massive development in Ocean County.  But the same process can be seen in hundreds of inland streams and ponds.

Learn more about the failure of the statewide water supply plan here.

Interactive Map of Threats to the Pinelands

View our interactive map of current threats to the health of the Pinelands ecosystem. Learn how you can help. You can also visit our Take Action page or become a member of the Pinelands Action Network. 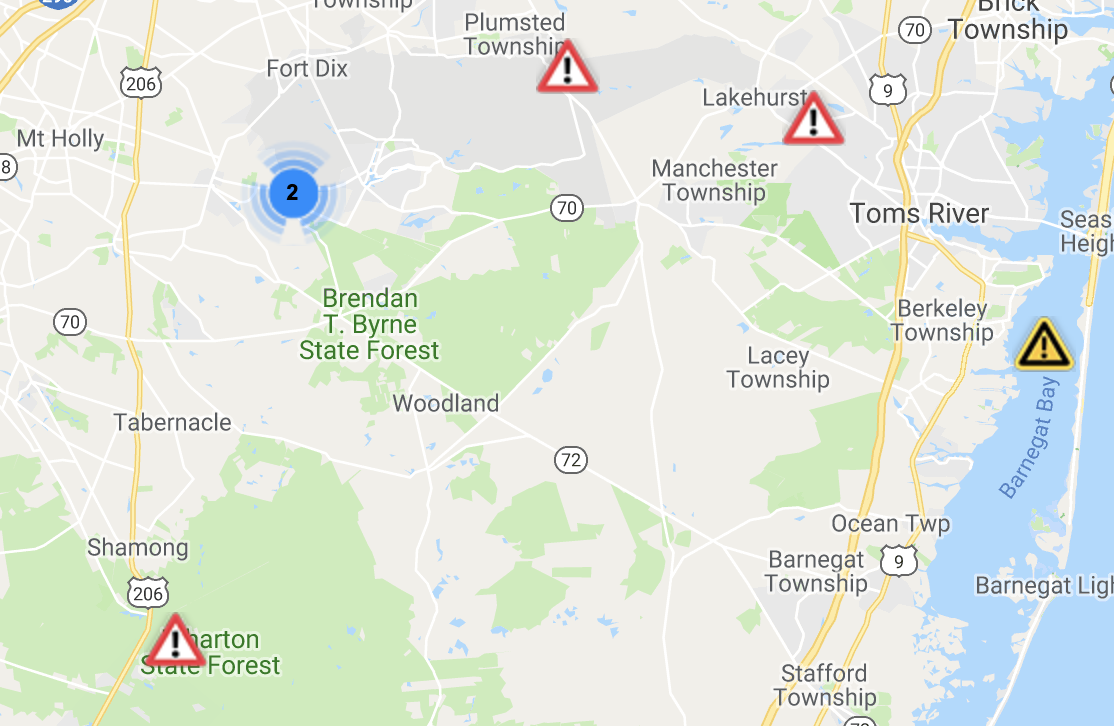 Learn about the hot and pending issues the we are working on via our interactive issues map.